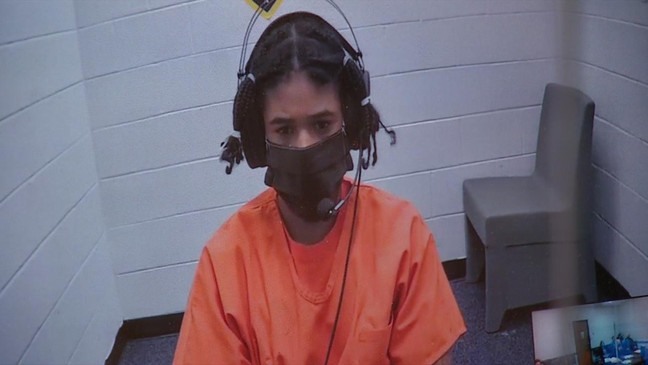 CHARLESTON, W.Va. (WCHS) — A detective testified in court Wednesday that a man accused of killing two women in Charleston confessed to the shooting after his arrest.

Marquis Goodman, 22, of Detroit is charged with two counts of first-degree murder. He appeared in Kanawha County Magistrate Court before Magistrate Marva Crouch for a preliminary hearing.

Goodman is accused of killing Kytiana Belcher, 22, and Bria White, 26. The women, who police said were in a relationship, were found shot to death on Oct. 8.

Court documents filed against Goodman revealed that a Michael Myers costume mask found during a search for evidence in the investigation helped secure charges against him.

Detective D.L. Williams with the Charleston Police Department was the only witness to testify at the hearing.

He told the court that Goodman was developed as a suspect early on in the investigation.

Goodman was captured in Detroit six days after the shooting. Williams and another detective traveled there and conducted an interview with him after he was taken into custody, Williams said.

“During this interview, he did confess to killing Bria White and Kytiana Belcher,” Williams testified. “Mr. Goodman had stated something to the extent of Ms. White had set him up to be robbed and that’s why he decided to kill her. Following shooting her, Kytiana took off running from the immediate area and he stated he followed her and killed her because she was a witness,” he said.

Goodman’s attorney, Robby Long, argued that his client was acting in self-defense.

“Mr. Goodman was set up and robbed by these young ladies and by their male friends who subsequently gave directives to kill him and he, in fear of his life, acted in self-defense by taking these young ladies’ lives,” Long said in closing. “There are two sides to this story.”

Crouch found probable cause and sent the case to circuit court to be heard by a grand jury.

Police found White’s body first about 1:30 a.m. the morning of the shooting after receiving complaints about gunshots in the 300 block of Hunt Avenue.

Detectives said they were attempting to locate Belcher, after learning the two were in a relationship but were unable to find her at the time. Just before 8 a.m., dispatchers told police that a body had been found by a neighbor in the 1000 block of Grant Street. The woman, later identified as Belcher, had been shot once in the neck.

After reviewing Belcher’s phone, police said they found a video that was posted to her Snapchat account about 1:17 a.m. that showed a Black man, wearing a blue zip-up jacket with white stripes on the sleeves, black shorts and a Michael Myers costume mask covering his face. Detectives said White could be seen walking behind the man in the video. “This video was posted approximately 13 minutes before the dispatched shots fired call,” Detective D.L. Williams wrote in the complaint.

After reviewing surveillance cameras in the area, police said they observed a Black man running from the area where Belcher was found shot about 1:27 a.m. Police noted that the man, who was running toward the intersection of Main and Marion streets, appeared to be removing several articles of clothing. Then, two minutes later, the same man was seen walking to an overgrown yard and appeared to be hiding an item near a set of steps. Detectives said they were able to find a 9mm Glock in the same yard where the man was seen on video hiding something.

A witness told police that the suspect was hiding in a field near where the gun was found. The witness also told police that the suspect had thrown an unknown item into a dump trailer near Main and Marion streets. While walking through the field, detectives said they found a blue zip-up jacket with white stripes on the sleeves and an open-faced, black ski mask. A Michael Myers mask was found in the dump trailer, police said.

Detectives noted in the complaint that a preliminary ballistic examination indicated that the same gun was used to shoot both women, and a test-fired cartridge from the gun presumptively matched casings found at both scenes.

Another witness told detectives that he was with both women the night of Oct. 7, along with a man named “KJ.” The witness told police that “KJ” was wearing a Michael Myers mask with a black ski mask underneath and the three had left his home about 1 a.m. the next morning.

One of White’s family members told police that “KJ” was a man named Marquis Goodman.

“In this video, Goodman is wearing a blue zip-up jacket with white stripes on the sleeves, black shorts, and a Michael Myers costume mask on his head,” Williams said. “The clothing that Mr. Goodman is wearing in the Littlepage Terrace surveillance video is identical to what the suspect was seen wearing in the surveillance video from Copley’s Towing that shows a Black male fleeing the area of the shooting and appearing to remove articles of clothing.” Detectives said the same items also are “identical” to the discarded items located during the investigation.

Goodman is being held at the South Central Regional Jail.